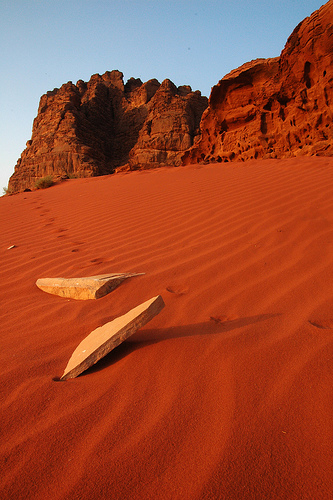 When I first started writing Beyond the Red back in 2013, I had no idea how to use Pinterest. I’d heard it could be inspirational with some of the photos there, and from what I’d seen from other writers, it seemed like a really great way to get visual, mood-board type things going.

Seeing how I knew I’d be completely making up a world from scratch, a mood board full of photos to help me get a feel for what I wanted with the setting seemed like a good idea, so I opened up a private board and started searching.

While even now, I’ve really only scratched the surface with Pinterest’s capabilities, I have found it time and time again to be a really excellent source of storyworld inspiration, especially in early stages of the manuscript.

In my case, when I first began brainstorming I knew I wanted the setting to be on another planet, and I knew I wanted it to take place primarily in a red desert. I imagine a society with advanced, alien technology in a future world far away from Earth.

And other than crimson sand and technology, I really had no idea what it looked like.

So I began by searching red deserts. And gorgeous red sandscapes led to beautiful pictures of deserts as white as snow. And that lead to images of incredible people who live in deserts, which led to further searching and thinking about how people would dress. From there I searched for alien and desert cities, which lead me to paintings from Sci-Fi artists and incredible pictures of Istanbul and Dubai. And eventually I ended up with this mood board.

From those pictures, I was really able to get a feel for what I liked and didn’t like—what fit into my evolving sense of the planet that would become Safara. Before long I was able to picture many of the main settings, which was what I needed to start writing.

Ava Jae is a YA and NA writer, an Assistant Editor at Entangled Publishing, and is represented by Louise Fury of The Bent Agency. Her YA Sci-Fi debut, BEYOND THE RED, is releasing March 2016 from Sky Pony Press. When she’s not writing about kissing, superpowers, explosions, and aliens, you can find her with her nose buried in a book, nerding out over the latest X-Men news, or hanging out on her blog, Twitter, Facebook, tumblr, Goodreads, Instagram, or YouTube channel.